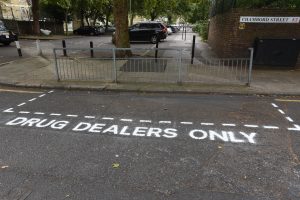 The Columbia Tenants and Residents Association has been actively working within the Weavers Community Action Group to tackle the ongoing problem of drug dealing on our streets and drug misuse on Tower Hamlets Homes properties.

On Sunday 16th September an anti-drugs street art campaign appeared on streets in and around Columbia Road, Shoreditch, London, E2.  The artists, known as the Columbia Road Cartel had responded to a request for traffic calming measures to ease drug dealer car congestion in the area.

Vice-Chair of the Columbia Tenants and Residents Association, Penny Creed said, “Drug dealing on our streets has reached astonishing levels with some local streets seeing up to ten deals in a single day. Dealers driving fast cars are putting residents at risk and users have been accessing communal spaces in properties to use on resident’s door steps.

“The CTRA has spent time trying to work with agencies over the last few years to highlight the issue and support initiatives by the police, Tower Hamlets Homes and London Borough of Tower Hamlets. However, three years later little has changed.

“Although there are some individuals trying to do their best to resolve this issue, cuts to police, mental health, drug and homeless programmes as well as council resources have hampered progress.

“We welcome the artwork by the Columbia Road Cartel and will continue to work within the Weavers Community Action Group and with other agencies to help bring about change.”

Watch our short fire safety video on 7 easy ways to help keep yourself and your neighbours safe!

For more fire safety advice go to our website http://ow.ly/GpAx50Jufsm, or check out @LFBTowerHamlets

Fantastic day on Columbia Road. Many thanks to everyone who made this possible 👏👏👏 #PlatinumJubilee

I'm sure your day is good, but does it contain an *actual corgi parade*? 🐕